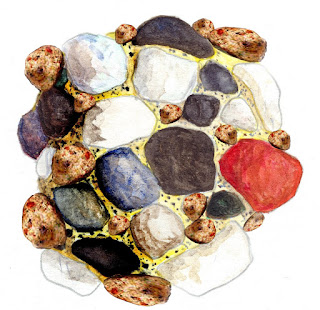 A tasty foraminiferan protist?
I work with many clever people. One measure of "cleverness" is the capacity to make quick connections between disparate concepts. Check out Claire Beynon's post at Ice Lines for a good example.
(I wonder if I've been clever enough to figure out what Claire was thinking of ...)
Posted by Unknown at 12:01 PM No comments:

... as in, the year I knew. To acknowledge the New Year, I'll pictorially summarize some significant stuff 2008 brought (in no particular order).
HAPPY Y2K+9! 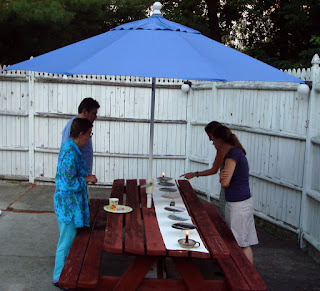 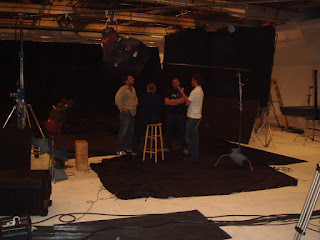 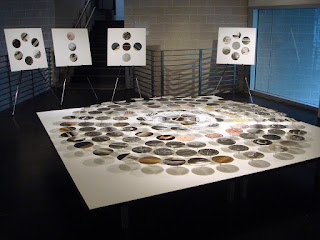 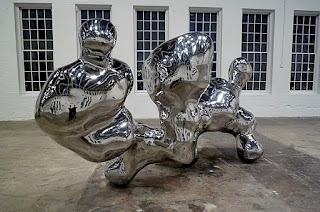 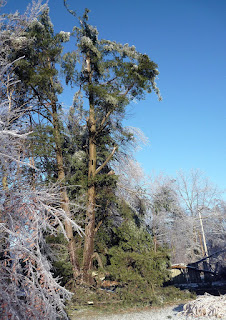 The mother of all ice storms almost wrecks our house 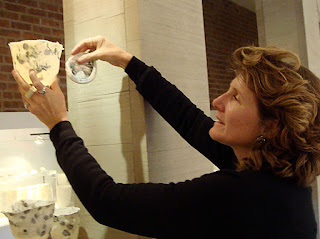 Katherine Glenday shows me her vessels in NYC 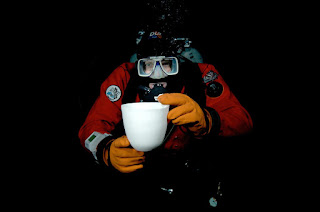 I show Katherine her vessels in Antarctica 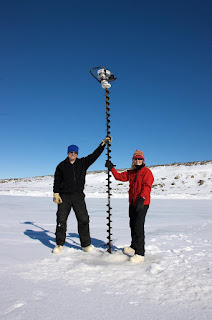 Claire and I find flat, easy-to-drill ice (finally!)
Posted by Unknown at 4:29 AM No comments:

It's a good thing my "polar wings" were spread when I landed here. Between the big ice storm last week (no power for 6 days), the recent snow, and now the bitter cold, it's as though Explorers Cove doesn't want to release her grip.

Some musings today about birds and making images, just to warm the spine: 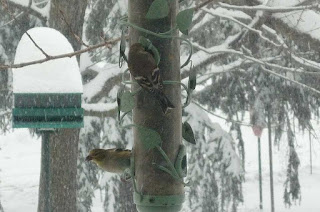 Finches at the bird feeder during a snowstorm

I've always held a fascination for birds. Winter brings out their best: when it's cold, they puff up their feathers and become animated fuzzballs. Many of their root behaviors - forage and battle for food / attract and battle for mates - become evident in footprints frozen in the snow. The sleuth in me tries to discern these behaviors from their tracks, much as a paleontologist tries to interpret the life of dinosaurs from their prints in fossil mud. 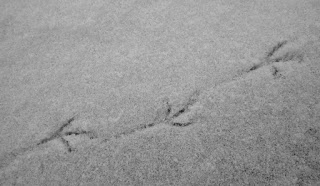 Chickadee tracks in the snow

Frozen footprints and fossil tracks represent hard evidence of reality in the natural world. I find it interesting that photographs were once analogous to these tracks. That's no longer true, thanks to digital imaging and software that allow us to merge images seamlessly. For example, I can show you compelling pictures of Chairman Mao wearing a New Jersey Devils uniform (I hear he was a big ice hockey fan!) or Caroline Kennedy pushing a broom at Wal-Mart (that's what every soccer-mom representative of middle-class America has done, right?). But do such images represent reality? No - they are manifestations of the imagination. What has unlocked our limitless creativity has also shattered our faith in photographic evidence. It's a New Age for creatives ... as well as charlatans and thieves.

There is considerable debate among scientists about how we should use images to report our findings, i.e., to depict the realities of nature. I have touched on this topic in my art/science blog, and it is something that Claire Beynon and I have incorporated in previous work. 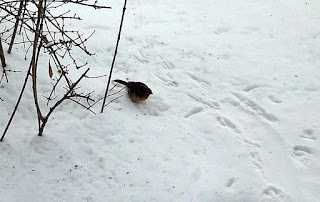 Ah, look -- an Adelie penguin has been visiting my bird feeder! For the first time in evolutionary history, penguins have tasted sunflower seeds.
Posted by Unknown at 7:41 AM No comments: 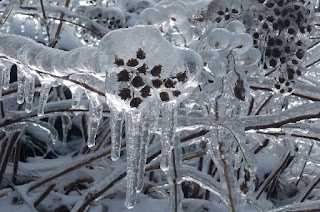 ...and into the fire. In my case, however, the expression is "out of the freezer and onto the ice." 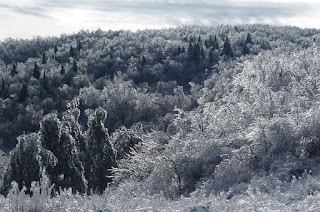 I left Explorers Cove because it became an icy, slushy mess. Look at the scene here in upstate New York!

Everything is coated with ice due to a freak storm. For the past four days, we've been without electricity ... and heat, and a washing machine, and a TV. It's like camping near the Herbertson Glacier!

The sea ice is getting too sloppy to work on safely -- each step can drop you into a waist-deep pool of melt water. Time to make the last dive, pack camp, and head for home.
It's hard to say goodbye. We had a difficult, weather-abbreviated 2008 field season filled with logistical challenges due to the 10-yr-old ice. But the season was a success: sampling sites were surveyed, specimens were collected, experimental arrays deployed, and art was made. And -- most importantly -- no one was injured in the process.
I'm sure I speak for Molly and Sally when I say that five outstanding people made this season not only possible, but thoroughly enjoyable. Cecil Shin, Shawn Harper, Henry Kaiser, and Steve Clabuesch were an awesome team of divers. 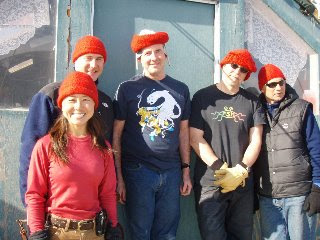 G-093 divers: Cecil, Shawn, Henry, me, and Steve
In addition to dive tending, Claire Beynon worked within and behind the scenes to ensure that things got done and that our voices, visions, and music were heard worldwide. 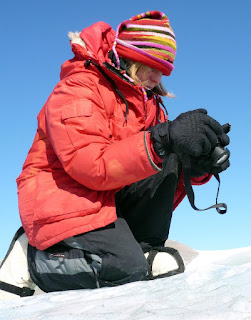 Claire photographing ice lines
Eight souls aboard Explorers Cove field camp ... eight souls sad to leave it. I'm sure that we will cast long shadows together far into the future. 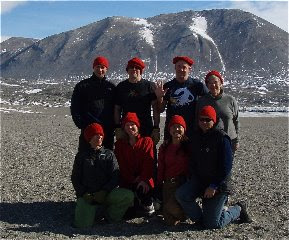 Posted by Unknown at 8:36 AM No comments:

What we do to amuse

We are often asked "what do you do for fun while in camp?"
The quick answer, at least for me, is "everything!" It seems like there isn't a moment that I'm not enjoying Antarctica, even when working on broken equipment in the freezing cold or toiling to batten down the hatches during a katabatic wind.
There are a few routine things we do as a group that are a lot of fun. Cooking comes to mind, with conversation around the dinner table focusing on animated story-telling. We also show a weekly movie (with popcorn, of course) inside the Jamesway, although it's sometimes difficult to find a film that matches our disparate tastes. This year, it looks like a new activity has been added to our repertoire: "Felting" hats. 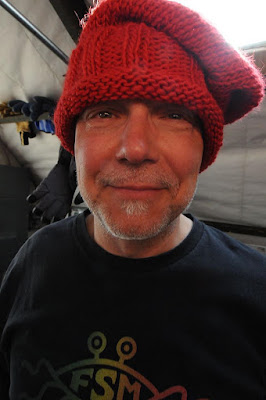 Pat Clabuesch (Steve's mom) knitted a red hat for each of us to wear for our group picture. The plan was for us to felt the hats, so that they fit snugly. That turned out to be a problem -- no matter how much we boiled, stirred, and swirled the hats, we just couldn't get them to felt correctly. We still had a lot of fun felting ... and posing for pictures. 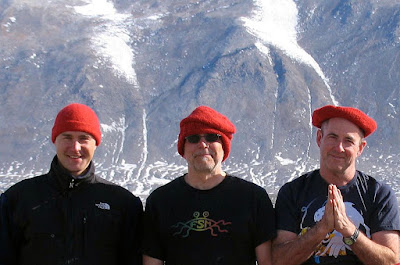 Shawn's hat is properly felted (I guess it's now a "cap"). Mine stayed rather floppy. Henry preferred to wear his like a French painter's cap ... or perhaps a Cardinal's headgear, given his prayer-like pose? I don't know for sure.
I do know that we had a lot of fun felting, thanks to Steve's mom.
Posted by Unknown at 6:43 AM No comments:

Walks are an important part of field work. We take them often ... it affords an opportunity to ponder this place, collect data, and plan future work. Sometimes we walk to blow off steam. 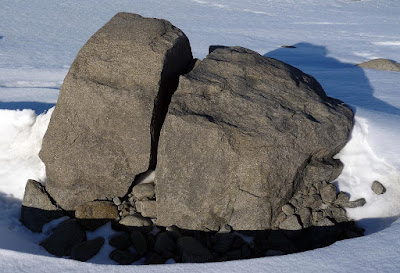 Claire and I took a final walk along the glacial moraines overlooking Explorers Cove. We were searching for rocks that had been split in half by the weather ... basically, moisture seeps into cracks during the summer, then freezes and expands during winter. Repeated freeze/thaw cycles like this turn rock into sand. We will make a story out of this process, and develop some K-12 education materials together with a dedicated team of teachers. 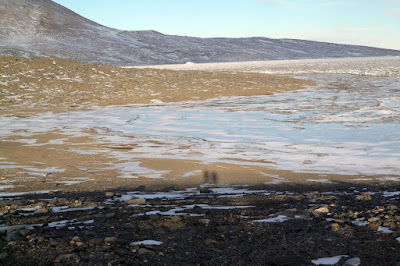 We cast some long shadows during that walk -- over broken ground and split rocks to reach the sea ice. Our thoughts extended across that frozen ocean...
Posted by Unknown at 10:40 PM 1 comment: