Farewell to an Ice Colleague

This week I lost a dear friend and colleague, Dr. Matt Florczyk, to a long illness.  I first knew Matt as a graduate student in our Biomedical Sciences program, and later as an ice hockey teammate with the Albany Lab Rats. He was an incredibly gifted young man, both athletically and intellectually, with a warm, compassionate personality.
I shed blood with him during hockey games; tonight I shed tears, missing him on the ice.
______________
Matt's obituary and information on a memorial fund can be found here.
Posted by Unknown at 6:52 PM 1 comment: Links to this post

Today we celebrate the inauguration of our new President. It is a time of hope, and an opportunity for change. I will work comfortably with that thought.

One theme of this blog, and of my website, is the intersection of art and science. I delight in conversation with artists, scientists, and educators who share this interest.
As you might gather from previous posts, Claire Beynon has been a constant source of inspiration in exploring the art/science interface. Our projects leave me puzzled at times, but they always foster playful curiosity. We are now collaborating with Schenectady artist/educator Chris Moran to help promote art, science, and their common element of curiosity through an upcoming workshop sponsored by the Capital Region Center for Arts in Education. 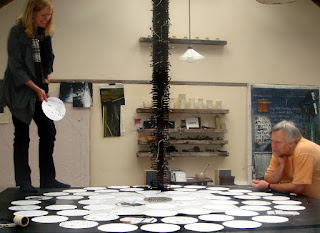 A puzzling moment (for me; Claire is amused) in the studio
Curiosity is a powerful driving force. In an evolutionary context, the adaptive significance of curiosity seems quite obvious: It prompts an individual to discover new resources (food, shelter, material goods), to find solutions to problems (e.g., cure an ailment), to select a compatible mate, and to occupy a comfortable social setting. At a personal or psychological level, however, curiosity presents many challenges. The risks and rewards of acting on our curiosity must be weighed carefully in order to optimize the outcome, which is the measure of success (and a definition of wisdom).

Modern science employs a well-scripted process - the scientific method - to act on curiosity. Adhering to this approach provides us with verifiable (more accurately, falsifiable) information which, in sum, has freed humanity from reliance on chance or superstition. Metaphorically, the scientific method provides us with the factual tools needed to navigate successfully the labyrinth of nature.

I wonder if the scientific method can help us explore imagined worlds, where outcomes are not necessarily the product of natural law? This question must have been asked a thousand times already. I'd love to hear from an artist who has formalized hypotheses, conducted controlled experiments, and analyzed the results with some measure of statistical significance.
More importantly, I'd love to know how they measure success. And I wonder if that success defines artistic wisdom...
Posted by Unknown at 10:30 AM 3 comments: Links to this post

In 1878, agglutinated foraminifera were dubbed "nature's little masons" by A.M. Norman, a prominent British reverend and naturalist. William B. Carpenter, arguably the 19th-century's premier cell biologist, also pointed to the "skill" displayed by foraminifera in selecting materials to build their shells -- a characteristic that got Edward Heron-Allen in heated debates with colleagues over the definition of intelligence. (See, for example, his paper entitled Purpose and intelligence in the Foraminifera published in the Proceedings of the Zoological Society of London, 1914:1069-1070.) In future posts, I'll dedicate some space to Heron-Allen and examine the seemingly incongruous mix of science and mysticism that marked his career. 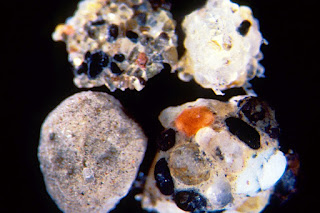 Four species of agglutinated foraminifera from the same handful of Antarctic sediment. Each species collects a characteristic range of grain sizes or type of mineral to build a shell.

Speaking of incongruous mixes, Claire Beynon's December 28th post juxtaposed a recipe for chicken kofta and my watercolor of Astrammina rara - one of the unicellular giants that we collect in Antarctica. About a decade ago, Joan Bernhard and I used straightforward statistical approaches to show that Astrammina "selects" sediment particles that range in size from 0.25 to 0.50 mm to use as the main non-compressible (read: hard) component of its shell. Since then, we and coworkers have noted that A. rara's shell usually contains a conspicuous, red-orange sand grain. This feature prompted ceramic artist Katherine Glenday to write a poem in which, to paraphrase, she describes A. rara as "the species that builds its heart on its house." I adore the beautiful aesthetic of that anthropomorphism! But it begs the question: does it really select one red grain, or is this simply a consequence of chance? If it is indeed displaying selectivity, what is the molecular basis of this cellular process?
As an expression of rote scientific curiosity, we'll do a bit of experimental work to explore this question and post some results here. In a sense, though, I almost don't want to know the answer. Why despoil a beautiful poem with a rational whitewash?
Posted by Unknown at 9:26 PM 2 comments: Links to this post